There are many differences in the way people talk about gender transitioning. For example, some people say that FTMs (female to male transsexuals) do not become men, because they always were men (internally). I prefer to see my transition as a process of becoming (externally) the man I was always meant to be – taking on the external appearance of the invisible man who has always lived inside my head.

Some people use the term “gender transition” to mean changing one’s outward social gender presentation, and reserve the term “sex reassignment” for people who have surgery to alter their genitals and other parts of their bodies. You will also frequently see the acronym “SRS” – meaning Sex Reassignment Surgeries.

To find out more about my book about gender transitioning from female to male, LOOK inside it, and see the full table of contents, just click on the Amazon link below!

“I call it gender confirmation surgery because I believe that out of the myriad labels I’ve heard for the procedure – sex reassignment surgery, gender reassignment surgery, and sex change operation, to name but a few – none is as accurate when it comes to describing what is actually taking place as gender confirmation surgery. For me, most, if not all, of the other names used for the procedure – or, more accurately, the family of procedures – suggest that a person is making a choice to switch genders. From the hundreds of discussions I’ve had with individuals over the years, nothing could be further from the truth. This is not about choice; it’s about using surgery as one of the therapeutic tools to enable people to be comfortable with their gendered self. Merriam-Webster’s defines ‘confirmation’ as follows: ‘confirming proof; corroboration; the process of supporting a statement by evidence.’ That said, if such surgery helps confirm the way a person feels he or she was meant to be, shouldn’t the name reflect that truth?”

I agree with Dr. Schechter. Terminology has to change to reflect our evolving consciousness. Medical treatment for FTMs used to be referred to as “having a sex change,” and is still commonly referred to in that way by the general population. However, the preferred term is now “gender transition”, and the person going through this process is referred to as “transitioning.” And I suspect that the term “gender confirmation” is very likely to become more popular in the future. As is the similar term “gender affirmation.”

As for being politically correct – the other day, someone said to me, “I know this transgendered person, but I don’t know whether to call then he or she – this person still has a penis.” My response: “The correct and respectful thing is always to call people what they want to be called. It’s really simple.”

The comic strip below reminds us how much harm can be done if we don’t respect what people want to be called. 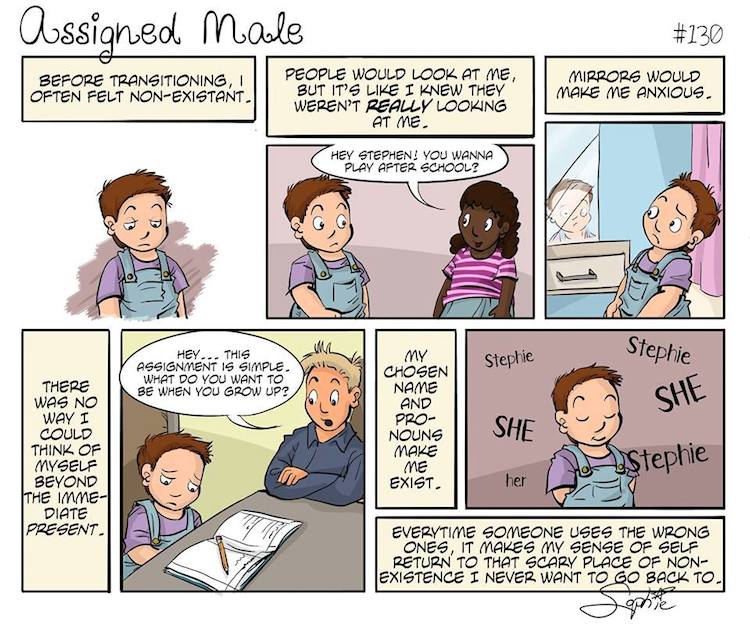 The comic strip above is from Sophie LaBelle’s webcomic Assigned Male. You can see more of her work at AssignedMale.tumblr.com and at her Etsy store.

When it comes to terminology – the only “correct” thing to do is to respect what people want. It’s not about politics – it’s about being polite! And if you don’t know – just ask …

before buying from Amazon – small commissions are really helpful! They cost you nothing, but are a way of saying: “Hey buddy, thanks for sharing that info, let me buy you a coffee!” BEST OF ALL – just SUBSCRIBE to my blog. It makes you part of our community, and gets you free weekly updates about new posts. Thanks in advance – reader support keeps me going and makes it all worthwhile!