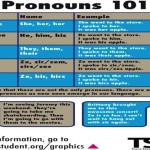 Pronouns can be a nightmare for people who are transitioning gender! When I first transitioned gender from female to male, most people who knew me kept forgetting to use the correct pronouns (“he” and “him” instead of “she” and “her”). A pronoun is a word that takes the place of a noun, and very often they are gender-specific - that is, they communicate the gender of the noun … END_OF_DOCUMENT_TOKEN_TO_BE_REPLACED